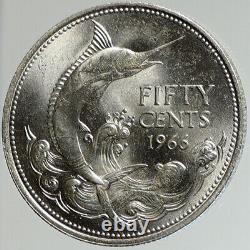 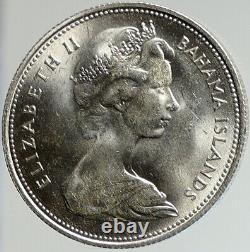 Item: i112446 Authentic Coin of. 1966 Silver 50 Cents 29mm (10.45 grams) 0.800 Silver 0.2667 oz. ASW Reference: KM# 7 COMMONWEALTH OF THE BAHAMA ISLANDS · ELIZABETH II ·, Crowned bust of young UK queen Elizabeth II right. FIFTY CENTS Blue Marlin fish (Istiophorus albicans), year below. The Bahamas, officially the Commonwealth of the Bahamas, is an archipelagic state of the Lucayan Archipelago consisting of more than 700 islands, cays, and islets in the Atlantic Ocean; north of Cuba and Hispaniola (Haiti and the Dominican Republic); northwest of the Turks and Caicos Islands; southeast of the US state of Florida and east of the Florida Keys.

The Bahamas became a British Crown colony in 1718, when the British clamped down on piracy. After the American War of Independence, the Crown resettled thousands of American Loyalists in the Bahamas; they brought their slaves with them and established plantations on land grants. Africans constituted the majority of the population from this period. Slavery in the Bahamas was abolished in 1834.

This item is in the category "Coins & Paper Money\Coins: World\North & Central America\Bahamas". The seller is "highrating_lowprice" and is located in this country: US.