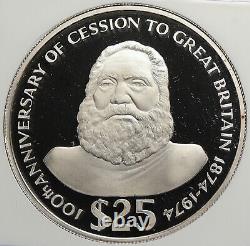 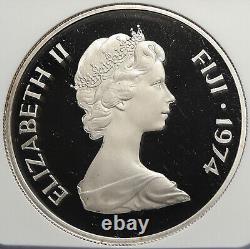 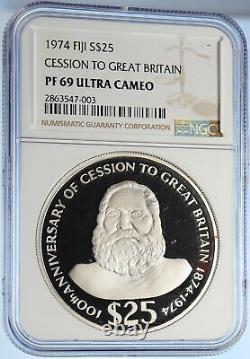 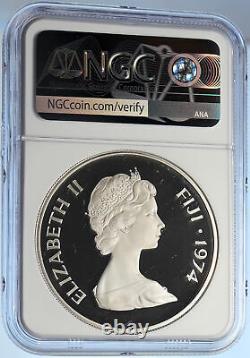 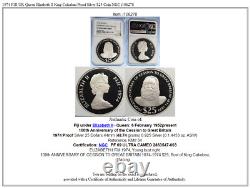 Item: i106278 Authentic Coin of. Queen: 6 February 1952-present 100th Anniversary of the Cession to Great Britain 1974 Proof Silver 25 Dollars 44mm (48.74 grams) 0.925 Silver 0.1.4453 oz. ASW Reference: KM# 34 Certification: NGC. PF 69 ULTRA CAMEO 2863547-003 ELIZABETH II FIJI 1974, Young bust right. Elizabeth II (Elizabeth Alexandra Mary; born 21 April 1926) is, and has been since her accession in 1952, Queen of the United Kingdom, Canada, Australia, and New Zealand, and Head of the Commonwealth. She is also Queen of 12 countries that have become independent since her accession: Jamaica, Barbados, the Bahamas, Grenada, Papua New Guinea, Solomon Islands, Tuvalu, Saint Lucia, Saint Vincent and the Grenadines, Belize, Antigua and Barbuda, and Saint Kitts and Nevis. Elizabeth was born in London to the Duke and Duchess of York, later King George VI and Queen Elizabeth, and was the elder of their two daughters. She was educated privately at home. Her father acceded to the throne on the abdication of his brother Edward VIII in 1936, from which time she was the heir presumptive. In 1947, she married Prince Philip, Duke of Edinburgh, with whom she has four children: Charles, Anne, Andrew, and Edward. Elizabeth's many historic visits and meetings include a state visit to the Republic of Ireland and reciprocal visits to and from the Pope. She has seen major constitutional changes, such as devolution in the United Kingdom, Canadian patriation, and the decolonisation of Africa. She has also reigned through various wars and conflicts involving many of her realms. She is the world's oldest reigning monarch as well as Britain's longest-lived. In 2015, she surpassed the reign of her great-great-grandmother, Queen Victoria, to become the longest-reigning British monarch and the longest-reigning queen regnant in world history. Times of personal significance have included the births and marriages of her children, grandchildren and great grandchildren, her coronation in 1953, and the celebration of milestones such as her Silver, Golden and Diamond Jubilees in 1977, 2002, and 2012, respectively. Moments of sadness for her include the death of her father, aged 56; the assassination of Prince Philip's uncle, Lord Mountbatten; the breakdown of her children's marriages in 1992 (her annus horribilis); the death in 1997 of her son's former wife, Diana, Princess of Wales; and the deaths of her mother and sister in 2002. Elizabeth has occasionally faced republican sentiments and severe press criticism of the royal family, but support for the monarchy and her personal popularity remain high. Fiji, officially the Republic of Fiji (Fijian: Matanitu Tugalala o Viti ; Fiji Hindi:), is an island country in Melanesia, part of Oceania in the South Pacific Ocean about 1,100 nautical miles (2,000 km; 1,300 mi) northeast of New Zealand's North Island. Its closest neighbours are Vanuatu to the west, New Caledonia to the southwest, New Zealand's Kermadec Islands to the southeast, Tonga to the east, the Samoas and France's Wallis and Futuna to the northeast, and Tuvalu to the north. Fiji consists of an archipelago of more than 330 islands-of which 110 are permanently inhabited-and more than 500 islets, amounting to a total land area of about 18,300 square kilometres (7,100 sq mi).

The most outlying island is Ono-i-Lau. The two major islands, Viti Levu and Vanua Levu, account for 87% of the total population of 898,760.

About three-quarters of Fijians live on Viti Levu's coasts, either in Suva or in smaller urban centres such as Nadi-where tourism is the major local industry - or Lautoka, where the sugar-cane industry is paramount. Due to its terrain, the interior of Viti Levu is sparsely inhabited. The majority of Fiji's islands formed through volcanic activity starting around 150 million years ago. Some geothermal activity still occurs today, on the islands of Vanua Levu and Taveuni.

Sabeto Hot Springs near Nadi is a good example. Humans have lived in Fiji since the second millennium BC-first Austronesians and later Melanesians, with some Polynesian influences. Europeans visited Fiji from the 17th century onwards, and, after a brief period as an independent kingdom, the British established the Colony of Fiji in 1874. Fiji operated as a Crown colony until 1970, when it gained independence as the Dominion of Fiji. A military government declared a Republic in 1987 following a series of coups d'état.

In a coup in 2006, Commodore Frank Bainimarama seized power. When the High Court ruled the military leadership unlawful in 2009, President Ratu Josefa Iloilo, whom the military had retained as the nominal Head of State, formally abrogated the 1997 Constitution and re-appointed Bainimarama as interim Prime Minister.

Fiji has one of the most developed economies in the Pacific thanks to its abundant forest, mineral, and fish resources. The Ministry of Local Government and Urban Development supervises Fiji's local government, which takes the form of city and town councils. World-renowned expert numismatist, enthusiast, author and dealer in authentic ancient Greek, ancient Roman, ancient Byzantine, world coins & more. Ilya Zlobin is an independent individual who has a passion for coin collecting, research and understanding the importance of the historical context and significance all coins and objects represent.

When should I leave feedback? Please don't leave any negative feedbacks, as it happens sometimes that people rush to leave feedback before letting sufficient time for their order to arrive. The matter of fact is that any issues can be resolved, as reputation is most important to me. My goal is to provide superior products and quality of service. How and where do I learn more about collecting ancient coins? Visit the Guide on How to Use My Store. For on an overview about using my store, with additional information and links to all other parts of my store which may include educational information on topics you are looking for. This item is in the category "Coins & Paper Money\Coins: World\Australia & Oceania\South Pacific".