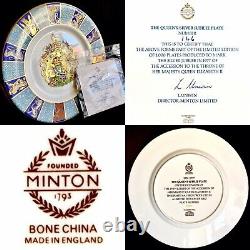 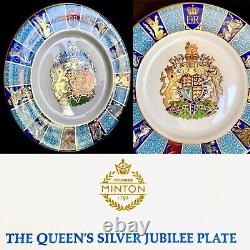 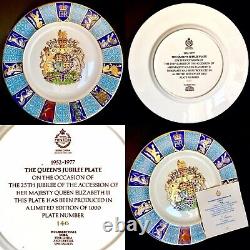 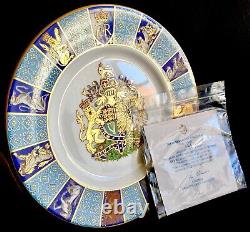 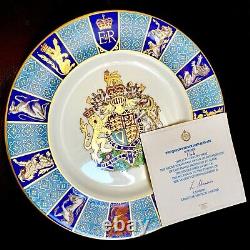 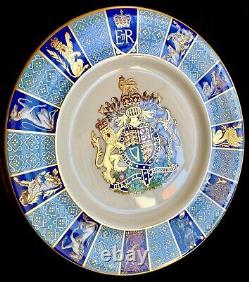 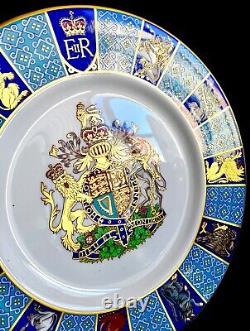 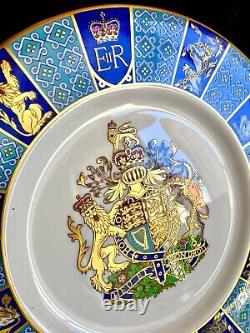 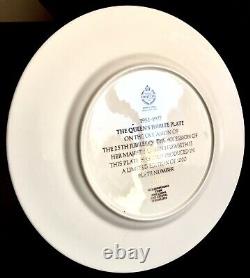 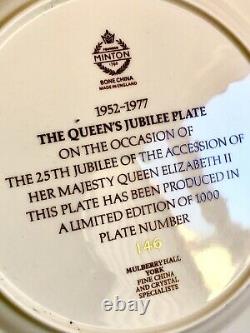 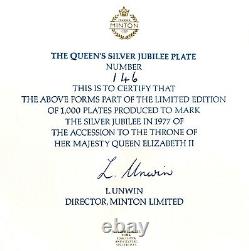 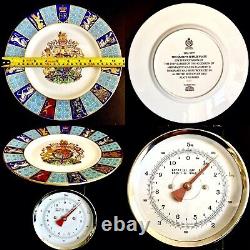 Absolutely marvellous quality plate weighing just over 600g and in perfect condition. One of only 1000 ever produced.

Needs to be seen and handled to be fully appreciated. Please browse all 12 sets of photographs attached for size, weight and condition as they are self explanatory. Queen Elizabeth II became the longest-reigning British monarch on 9 September 2015 when she surpassed the reign of her great-great-grandmother Victoria. On 6 February 2017 she became the first British monarch to celebrate a Sapphire Jubilee, commemorating 65 years on the throne. The esteemed Minton porcelain manufactory Mintons was a major ceramics manufacturing company, originated with Thomas Minton (17651836) the founder of "Thomas Minton and Sons", who established his pottery factory in Stoke-upon-Trent, Staffordshire, England, in 1793, producing earthenware.

He formed a partnership, Minton & Poulson, c. 1796, with Joseph Poulson who made bone china from c.

The products are more often referred to as "Minton", as in Minton china. Early Mintons products were mostly standard domestic tableware in blue transfer printed or painted earthenware, including the ever popular Willow pattern.

From c1798 production included bone china from his partner Joseph Poulson's near-by china pottery. China production ceased c1816 following Joseph Poulson's death in 1808, recommencing in a new pottery in 1824. On his death, Minton was succeeded by his son Herbert Minton (17931858) who developed new production techniques and took the business into new fields, notably including decorative encaustic tile making, through his association with leading architects and designers including Augustus Pugin and, it is said, Prince Albert. Minton entered into partnership with Michael Hollins in 1845 and formed the tile making firm of Minton, Hollins & Company, which was at the forefront of a large newly developing market as suppliers of durable decorative finishes for walls and floors in churches, public buildings, grand palaces and simple domestic houses. The firm exhibited widely at trade exhibitions throughout the world and examples of its exhibition displays are held at the Smithsonian Institution in Washington, D. Where the company gained many prestigious contracts including tiled flooring for the United States Capitol. Hard white unglazed "statuary porcelain", later called Parian ware due to its resemblance to Parian marble, was first introduced by Spode in the 1840s.

It was further developed by Minton who employed John Bell, Hiram Powers and other famous sculptors to produce figures for reproduction. In 1849 Minton engaged a young French ceramic artist Léon Arnoux as art director and he remained with the Minton Company until 1892. This and other enterprising appointments enabled the company greatly to widen its product ranges, one of the first innovations being the very colourful and highly successful Palissy ware ware launched at The Great Exhibition of 1851. The Franco-Prussian War of 1870 gave Arnoux the opportunity to recruit the modeller Marc-Louis Solon who had developed the technique of pâte-sur-pâte at Sèvres and brought it with him to Minton. In this process the design is built up in relief with layers of liquid slip, with each layer being allowed to dry before the next is applied.

There was great demand for Solon's plaques and vases, featuring maidens and cherubs, and Minton assigned him apprentices to help the firm become the unrivaled leader in this field. Others introduced to Minton by Arnoux included the sculptor Albert-Ernest Carrier-Belleuse and the painter Antoine Boullemier.

On his death Herbert Minton was succeeded by his equally dynamic nephew Colin Minton Campbell who took the company into a highly successful exploration of Chinese cloisonné enamels, Japanese lacquer and Turkish pottery. In 1870 Mintons opened an art pottery studio in Kensington, London directed by William Stephen Coleman and encouraged both amateur and professional artists to become involved in pottery decoration and design.

When the studio was destroyed by fire in 1875, it was not rebuilt. From the mid-1890s onwards, Mintons made major contributions to Art Nouveau ceramics with a fine range of slip-trailed majolica ware, many designed by Marc-Louis Solon's son Leon Solon and his colleague John Wadsworth. Leon Solon was hired by Mintons after his work was published in the hugely influential design magazine The Studio and he worked for the company from 18951905, including a brief stint as Art Director. Solon's early designs for Mintons were strongly influenced by the Viennese Secessionist art movement, founded by Gustav Klimt and others, and so became known as Secessionist ware. The Secessionist range covered both practical and ornamental wares including cheese dishes, plates, teapots, jugs and comports, vases and large jardinières.

The shapes of ornamental vases included inverted trumpets, elongated cylinders and exaggerated bottle forms, although tableware shapes were conventional. Early Secessionist patterns featured realistic renderings of natural motifsflowers, birds and human figuresbut under the combined influence of Solon and Wadsworth, these became increasingly exaggerated and stylised, with the characteristic convoluted plant forms and floral motifs reaching a peak of extravagance around the turn of the 20th century.

The Minton factory in the centre of Stoke was rebuilt and modernised after the Second World War by the then managing director, J. Hartill, a great-great-great grandson of Thomas Minton. The tableware division was always the mainstay of Minton's fortunes and the post-1950 rationalisation of the British pottery industry took Mintons into a merger with Royal Doulton Tableware Ltd. By the 1980s Mintons was only producing a few different shapes but still employed highly skilled decorators. Mintons factory, including office accommodation and a Minton Museum, was demolished in 2002 as part of rationalisation within the Royal Doulton group.

Royal Doulton was taken over in turn by the Waterford Wedgwood group in January 2005. As a result of these changes, the ceramics collection formerly in the Minton Museum was partly dispersed. On the other hand, the Minton Archive has been kept together with help from the Art Fund, being transferred to the City of Stoke-on-Trent in 2015. Thomas Minton moved to Stoke in 1793 and opened his newly built factory in 1796 - he went on to become Spode's nearest rival. He made Minton ware famous - a cream-coloured and blue-printed earthenware majolica, bone china, and Parian porcelain; his factory was outstanding in the Victorian period for its "art" porcelains.

He also popularized the famous so-called Willow pattern. The Minton factory was the most popular supply source in the 19th century of dinnerware made to order for embassies and for heads of state and the name continues to the present day as part of the Waterford, Wedgwood and Royal Doulton Group. The first products of the Minton factory were blue transfer-printed wares, but in 1798 bone china (porcelain containing bone ash) was introduced, with considerable success. Until 1836, when Thomas Minton died and his son Herbert took over the business, the factory's staple products consisted of useful and unpretentious tablewares in painted or printed earthenware or bone china, following the typical shapes and decorative patterns of the period; figures and ornamental porcelains were made increasingly from the 1820s. In the 1820s he started production of bone china; this early Minton is regarded as comparable to French Sèvres, by which it was greatly influenced.

Minton's was the only English china factory of the 19th century to employ a Sèvres process called pâte-sur-pâte (ie: painted decoration in white clay slip instead of enamel before glazing). Minton also produced Parian figures. Herbert Minton, 17931858, succeeded his father as head of the firm, and to him was due its development and reputation. He enlisted the services of artists and skilled artisans.

Herbert Minton, one of the outstanding entrepreneurs of the 19th century, introduced new techniques and methods of production and established Mintons reputation for both industrial enterprise and artistic excellence. Pugin, Sir Henry Cole, and Prince Albert were close associates whose designs were used by Minton. The painter and sculptor Alfred Stevens, the French sculptors Hugues Protât and Émile Jeannest, and the painter John Simpson were also employed there.

In 1845, Herbert Minton took Michael Daintry Hollins into partnership, and the tile-making side of the business became known as Minton Hollins & Co. Herbert Minton's successful experiments in making encaustic tiles during the 1840s had set him at the forefront of a huge industry supplying the needs of institutions, churches, and domestic interiors all over the world. Later, he was a leader in exploiting industrial techniques for producing printed and painted tiles, and for the rest of the century the firm produced tiles in a vast array of styles, many of them designed by leading artists such as Christopher Dresser, Walter Crane, John Moyr Smith, and William Wise.

Relief-moulded tiles were introduced to the Minton range from the 1860s'. Minton produced some of the finest examples of Parian ware, a marble-like unglazed porcelain body developed during the 1840s and used most successfully for sculptural pieces. John Bell, the American Hiram Powers, and Albert Carrier de Belleuse were among the sculptors who produced statuary for Minton; scaled-down models of larger pieces by contemporary and past sculptors were also produced in Parian, and sometimes the material was used in combination with glazed and painted bone china for display pieces. The French ceramist Léon Arnoux became art director at Minton in 1849 and remained there until 1892.

Among his achievements were the development of Renaissance-inspired ceramics such as inlaid earthenwares, pieces painted in the style of Limoges porcelain, and the richly colourful majolica, first shown at the Great Exhibition of 1851 and used for all kinds of objects from large garden ornaments and elaborate display pieces to dishes and jugs for the table. Arnoux attracted other French artists to Minton, notably the sculptor Carrier de Belleuse, the modeller and decorator Marc-Louis Solon, and the painter Antoine Boullemier. Solon introduced the pâte-sur-pâte technique to Minton, having developed it previously at Sèvres. This laborious process involves building up a design in relief with layers of liquid slip, each one having to dry before the next is applied. Using this technique, Solon and his apprentices modelled diaphanously clad maidens and tumbling cherubs on vases and plaques with a skill that was unmatched at any other factory.

After Herbert Minton's death in 1858, the firm was run by his nephew Colin Minton Campbell, a similarly dynamic and innovative director. Oriental decoration preoccupied Minton from the 1860s onward. Highly original pieces, both in earthenware and bone china, evoked Chinese cloisonné enamels, Japanese lacquer and ivories, Islamic metalwork and Turkish pottery. In 1870, Minton's Art Pottery Studio was established in Kensington, London, under the direction of the painter W.

Coleman, in order to encourage both amateur and professional artists to decorate china and tiles for Minton; although popular and influential, the studio was not rebuilt when it burnt down in 1875. Minton's output of distinguished ornamental wares continued unabated to the end of the 19th century and beyond. From 1902, a range of slip-trailed majolica wares represented Minton's contribution to Art Nouveau. Minton's ability to pursue these often expensive technical and artistic challenges is a tribute to the success of the tablewares which have been the firm's financial backbone throughout its history.

The seller is "santoor-uk" and is located in Salford, Greater Manchester. This item can be shipped worldwide.