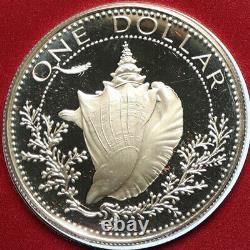 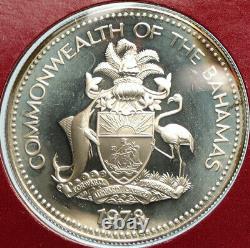 Item: i103324 Authentic Coin of. 197 8 Proof Silver Dollar 34mm (17.70 grams) 0.800 Silver 0.4666 oz. ONE · DOLLAR ·, Conch shell (Strombus alatus) above garland, year. The Bahamas, officially the Commonwealth of the Bahamas, is an archipelagic state of the Lucayan Archipelago consisting of more than 700 islands, cays, and islets in the Atlantic Ocean; north of Cuba and Hispaniola (Haiti and the Dominican Republic); northwest of the Turks and Caicos Islands; southeast of the US state of Florida and east of the Florida Keys.

The Bahamas became an independent Commonwealth realm in 1973, retaining Queen Elizabeth II as its monarch. In terms of gross domestic product per capita, the Bahamas is one of the richest countries in the Americas (following the United States and Canada). Its economy is based on tourism and finance.

How and where do I learn more about collecting ancient coins? Visit the Guide on How to Use My Store. For on an overview about using my store, with additional information and links to all other parts of my store which may include educational information on topics you are looking for. This item is in the category "Coins & Paper Money\Coins: World\North & Central America\Bahamas".