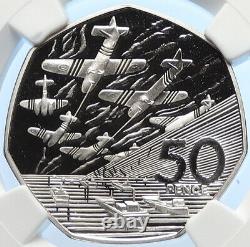 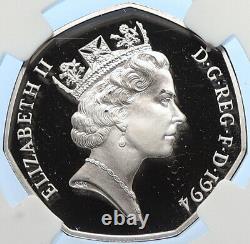 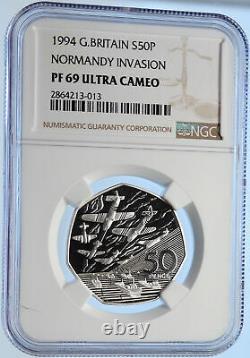 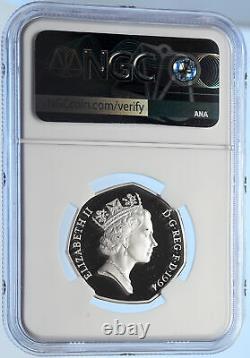 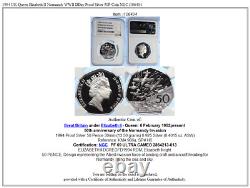 PF 69 ULTRA CAMEO 2864213-013 ELIZABETH II D·G·REG·F·D·1994 RDM, Elizabeth II right. 50 PENCE, Design representing the Allied invasion force of landing craft and aircraft heading for Normandy, filling the sea and sky. The Western Allies of World War II launched the largest amphibious invasion in history when they attacked German positions at Normandy, located on the northern coast of France, on 6 June 1944. The invaders were able to establish a beachhead as part of Operation Overlord after a successful "D-Day", the first day of the invasion. Allied land forces came from the United States, Britain, Canada, and Free French forces. In the weeks following the invasion, Polish forces and contingents from Belgium, Czechoslovakia, Greece and the Netherlands participated in the ground campaign; most also provided air and naval support alongside elements of the Royal Australian Air Force, the Royal New Zealand Air Force, and the Royal Norwegian Navy.

The Normandy invasion began with overnight parachute and glider landings, massive air attacks and naval bombardments. In the early morning, amphibious landings commenced on five beaches codenamed Sword, Juno, Gold, Omaha and Utah, with troops from the United States landing on Omaha and Utah, Britain landing on Gold and Sword, and Canada landing on Juno.

During the evening the remaining elements of the airborne divisions landed. Land forces used on D-Day sailed from bases along the south coast of England, the most important of these being Portsmouth.

By 4 July one million men had been landed. There was a total number of 195,700 naval personnel. The overall commander of the Allied Naval Expeditionary Force, providing close protection and bombardment at the beaches, was Admiral Sir Bertram Ramsay. The Allied Naval Expeditionary Force was divided into two Naval Task Forces: Western (Rear-Admiral Alan G Kirk) and Eastern (Rear-Admiral Sir Philip Vian). The warships provided cover for the transports against the enemy-whether in the form of surface warships, submarines, or as an aerial attack-and gave support to the landings through shore bombardment.

Defence against a mass U-boat attack relied on 19 Group of [RAF] Coastal Command... [it] included one Czech, one Polish, one New Zealander, two Australian and three Canadian squadrons. Even the RAF's own 224 Squadron was a mixed bag of nationalities with 137 Britons, forty-four Canadians, thirty-three Anzacs, two Americans, a Swiss, a Chilean, a South African and a Brazilian. The D-Day air offensive was another [RAF] multinational operation. It included five New Zealander, seven Australian, twenty-eight Canadian, one Rhodesian, six French, fourteen Polish, three Czech, two Belgian, two Dutch and two Norwegian squadrons At 05:37 the Norwegian destroyer Svenner, one of 37 destroyers in the Eastern Task Force, was sunk by a torpedo launched from a German E-boat.

In addition to the Cruiser ORP Dragon, the Polish destroyers ORP Krakowiak and Slazak took part in beach operations, while the destroyers OKP Blyskewica and Piorun were employed as part of the covering force. Elizabeth II (Elizabeth Alexandra Mary; born 21 April 1926) is, and has been since her accession in 1952, Queen of the United Kingdom, Canada, Australia, and New Zealand, and Head of the Commonwealth.

Times of personal significance have included the births and marriages of her children, grandchildren and great grandchildren, her coronation in 1953, and the celebration of milestones such as her Silver, Golden and Diamond Jubilees in 1977, 2002, and 2012, respectively. Moments of sadness for her include the death of her father, aged 56; the assassination of Prince Philip's uncle, Lord Mountbatten; the breakdown of her children's marriages in 1992 (her annus horribilis); the death in 1997 of her son's former wife, Diana, Princess of Wales; and the deaths of her mother and sister in 2002. Elizabeth has occasionally faced republican sentiments and severe press criticism of the royal family, but support for the monarchy and her personal popularity remain high. Great Britain, also known as Britain, is an island in the North Atlantic off the north-west coast of continental Europe. With an area of 209,331 km.

For on an overview about using my store, with additional information and links to all other parts of my store which may include educational information on topics you are looking for. This item is in the category "Coins & Paper Money\Coins: World\Europe\UK (Great Britain)\Other UK Coins". The seller is "highrating_lowprice" and is located in this country: US. This item can be shipped worldwide.