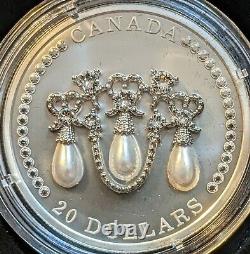 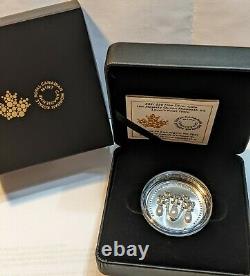 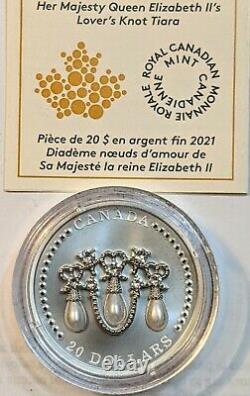 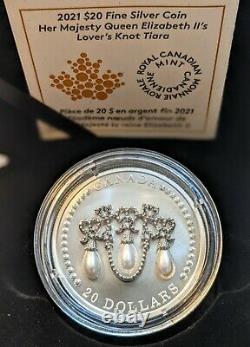 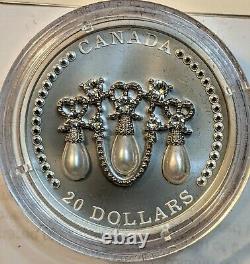 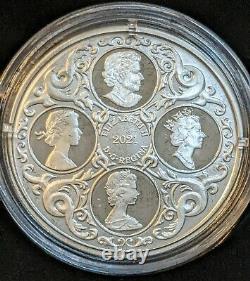 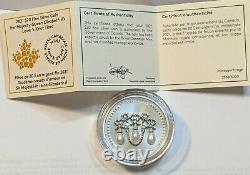 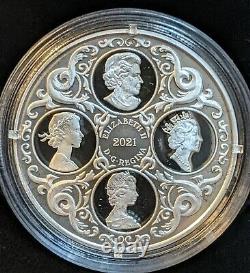 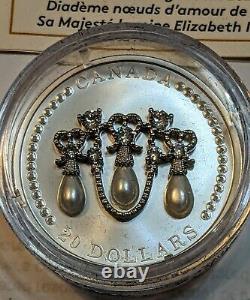 Pure Silver Coin - Her Majesty Queen Elizabeth's Lover's Knot Tiara - Mintage: 4,000 (2021). Celebrate Her Majesty's birthday with Swarovski® crystals and mother of pearl. One of the most famous royal pearl heirlooms, the beautiful Lover's Knot Tiara was commissioned by Queen Mary and passed down to her granddaughter, Her Majesty Queen Elizabeth II. It inspired the rhodium-plated design on this 2021 fine silver coin, which doubles as a special tribute to. Her Majesty on the year of her 95th birthday.

Paired with a special four-effigy obverse that marks the occasion, the tiara-themed reverse is "dripping" with mother of pearl and sparkling Swarovski® crystals. It's an exquisite jewellery-inspired celebration of the long-reigning Queen of Canada. 99.99% PURE SILVER CELEBRATION! This 38 mm pure silver coin is a tiara-themed tribute to Her Majesty Queen Elizabeth II on the year of her 95th birthday. The Lover's Knot Tiara inspired the coin's reverse, where the rhodium-plated design is adorned with Swarovski ® crystals that add a regal sparkle.

Our take on this famous tiara wouldn't be complete without one of its distinguishing features, its pearls, which are re-created with mother of pearl. The Royal Canadian Mint certifies all of its collector coins. Your coin's reverse features an interpretation of the Lover's Knot Tiara. Swarovski® crystals add a diamond-like sparkle to the rhodium-plated motif, while three mother-of-pearl pieces stand in for the tiara's suspended pearls.

The arrangement is framed by engraved elements resembling the tiara's headband. The commemorative obverse features scroll flourishes and the four effigies of Her Majesty Queen Elizabeth II that have appeared on Canadian coins since 1953. The Lover's Knot Tiara. This famous tiara is also known as Queen Mary's Lover's Knot Tiara, for it was Queen Mary who commissioned it from the House of Garrard in 1913. Modelled after the original Cambridge Lover's Knot Tiara worn by her grandmother and aunt, Queen Mary's version of the tiara is made from diamonds and pearls that once adorned the Ladies of England Tiara.

The regal headpiece was passed down to Her Majesty Queen Elizabeth II in 1953; it was later loaned to Diana, Princess of Wales, and has been frequently worn by Her Royal Highness The Duchess of Cambridge. Her Majesty has two birthdays! She was born on April 21, 1926, but in the United Kingdom, the monarch's birthday has always been publicly celebrated on the second Saturday in June. The Lover's Knot Tiara originally included upright pearls on top of the 19 diamond arches.

The pearls were taken from the Girls of Great Britain and Ireland Tiara, one of Her Majesty's favourite tiaras, but Queen Mary later had them removed from the Lover's Knot Tiara too. Your coin is individually encapsulated and presented in a Royal Canadian Mint-branded clamshell with a black beauty box. Composition 99.99% pure silver.

Artist RCM engravers (reverse), Susanna Blunt (obverse). This item is in the category "Coins & Paper Money\Coins: Canada\Commemorative". The seller is "sparky209" and is located in this country: US.