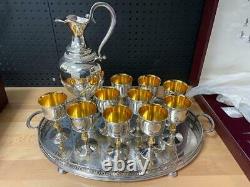 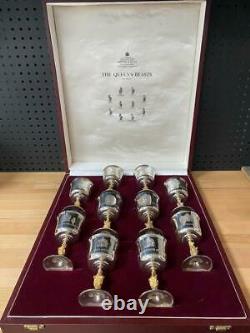 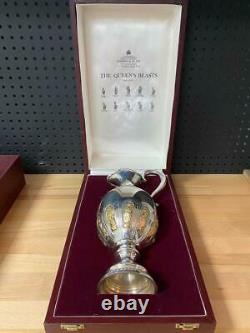 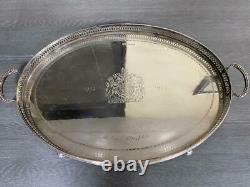 The ewer and goblets are based in their design on the ten heraldic statues commissioned by the British Ministry of Works from sculptor James Woodford representing the genealogy of Queen Elizabeth II, which stood in front of the temporary western annex to Westminster Abbey for the Queen's coronation in 1953. Woodford based his designs upon a set of ten heraldic sculptures at Hampton Court Palace near London made 400 years ago for Henry VIII, now known as'the King's Beasts. Because the'King's Beasts' represented the geneaolgies of Henry VIII and his wife Jane Seymour, they were deemed unsuitable for the Queen, and so,'The Queen's Beasts' were based upon her own genealogy.

The Queen's Beasts' are: The Lion of England, The Unicorn of Scotland, The White Greyhound of Richmond, The Yale of Beaufort, The Red Dragon of Wales, The White Horse of Hanover, The White Lion of Mortimer, The Griffin of Edward III, The Black Bull of Clarence, and The Falcon of the Plantagenets. The item "ELIZABETH II STERLING SILVER ROYAL COMMEMORATIVE QUEEN'S BEASTS GOBLETS + MORE" is in sale since Tuesday, September 15, 2020. This item is in the category "Collectables\Historical Memorabilia\Royalty".

The seller is "scgb18" and is located in Adelaide. This item can be shipped worldwide.