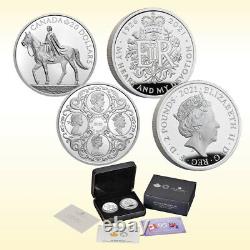 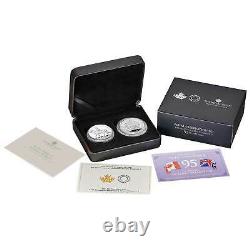 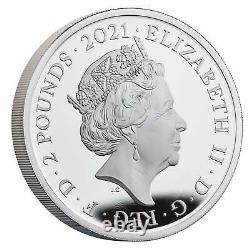 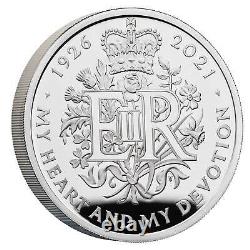 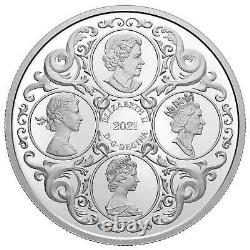 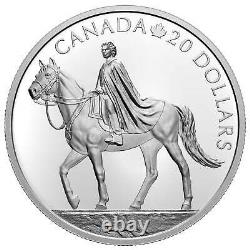 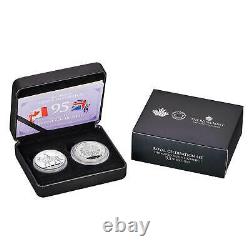 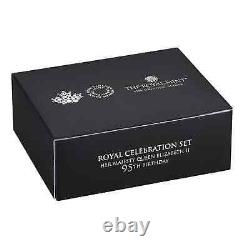 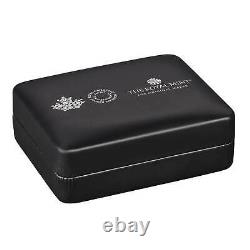 United in Celebration: Introducing a Two-Coin Set from the Royal Canadian Mint and The Royal Mint. In 2021, Her Majesty The Queen celebrates the latest milestone in a remarkable life as she becomes the first British monarch to reach a 95th birthday. To mark this historic event and personal achievement for Her Majesty, the Royal Canadian Mint and The Royal Mint are proud to present this two-coin set. Both mints have struck a one ounce fine silver coin for this special tribute and each is finished to Proof standard, enhancing each beautiful design. The coin from The Royal Mint features a reverse created by heraldic artist Timothy Noad.

In his design, The Queens royal heritage and symbols of the British nations are represented by a posy filled with thistles, daffodils, roses and shamrocks. The inscription My Heart and My Devotion is taken from The Queens first televised Christmas broadcast, and the obverse bears the fifth definitive coinage portrait of The Queen by Jody Clark. It depicts Her Majesty riding astride her horse, Centenial. The statue was unveiled by Her Majesty on July 1, 1992 on Parliament Hill in Ottawa, Canada.

The commemorative obverse features the four effigies of Her Majesty Queen Elizabeth II used on Canadian coinage since 1953. These familiar images take us from her first youthful portrait as a newly crowned queen to the experienced and much-loved monarch we know today.

The reverse features a symbolic design by British heraldic artist, Timothy Noad. Behind the Royal Cypher, The Queen's royal heritage and symbols of the British nations are represented by a posy filled with thistles, daffodils, roses and shamrocks. The reverse also bears the inscription, "MY HEART AND MY DEVOTION", referencing a promise The Queen made in her 1957 Christmas speech and has kept ever since. The obverse features the effigy portrait of Her Majesty The Queen by Jody Clark.

Cast in bronze and set atop a granite base, the monument commemorates the 125th anniversary of Confederation (1992) and the 40th anniversary of Her Majesty's reign. It was unveiled on Parliament Hill on July 1, 1992, during Her Majesty's visit, but the 10-year rehabilitation of the Centre Block building on Parliament Hill necessitated a temporary relocation in 2019. The monument is now located in front of the main gate of Rideau Hall, the official Canadian residence of Her Majesty and her representative, the Governor General of Canada. Packaging: Your two coins are individually encapsulated and presented in a custom black clamshell, with a black beauty box bearing the logos of the Royal Canadian Mint and The Royal Mint.