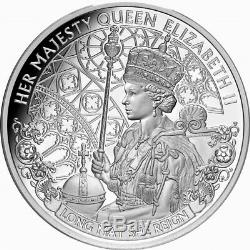 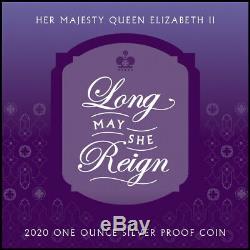 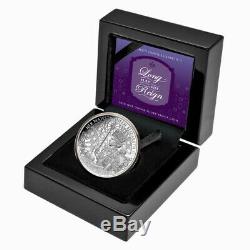 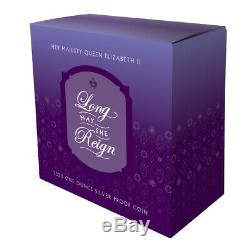 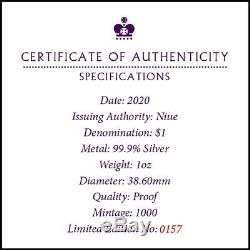 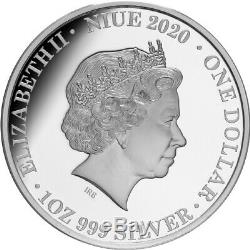 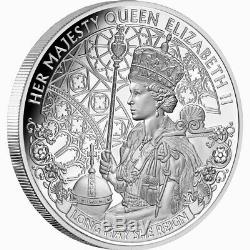 Get this exquisite tribute to the longest serving British monarch in history, Queen Elizabeth II! This intricately engraved portrait, a masterpiece of the minter's art, depicts her majesty at her coronation in 1953 on this low mintage, one troy ounce pure silver proof. Talisman Coins is honoured to bring you this extremely rare, pure silver proof celebrating the historic reign of Her Majesty Queen Elizabeth II. Elizabeth is the longest reigning monarch in British history, having passed Queen Victoria's length of reign in 2015. She is also the longest reigning queen in recorded history, bar none!

Long may she reign, indeed! This exquisite numismatic treasure features an intricately engraved, seated portrait of Queen Elizabeth II at her coronation in 1953. In keeping with 900-year-old tradition, her coronation took place at Westminster Abbey. Rich in both religious and historic significance, the ceremony offered a sense of hope after years of post-war austerity. In June, 1953, an estimated three million people lined the streets of London to catch a glimpse of.

For many, the Coronation represented the beginning of a hopeful new Elizabethan era. Underpinned by an exquisite proof quality finish, this official Niue legal tender pure silver dollar is distinguished by an inspired design.

A compelling tribute to the Queens record-breaking reign, the 38.60 mm diameter planchet depicts Queen Elizabeth II seated in front of the stained glass rose window at Westminster Abbey at her coronation in 1953, wearing the Imperial State Crown. She holds the Sovereigns scepter-with-cross, representing temporal power, in her right hand, and the Sovereigns orb, symbolizing the Monarch's role as Defender of the Faith and Supreme Governor of the Church of England, in her left. Struck from 1 troy ounce of 99.9% pure silver, and exquisitely packaged with individually numbered certificate, the 2020 Long May She Reign Silver Proof forms a sensational limited edition tribute to Britains longest reigning monarch. With a mintage limit of just 1,000, we urge immediate action if you wish to secure one of these stunning and historic low mintage beauties! Her Majesty, Queen Elizabeth II. In 2018 the world celebrated the 65th anniversary of Queen Elizabeth II's coronation. Princess Elizabeth was born on April 21, 1926 and was just ten years old when she unexpectedly became heir presumptive to the throne. When the King's health began to deteriorate in 1951, the young princess readily assumed many of her father, King George VI's, responsibilities. With her father's passing in 1952, Princess Elizabeth went into mourning and then acceded to the throne at the relatively young age of twenty-six on June 2, 1953. By this time she was a seasoned public figure, her years of service a strong indicator of what the Commonwealth could expect of its new queen. Today about 128 million people live in the 16 countries of which she is head of state. In her glittering Coronation portrait, Elizabeth wears the Imperial State Crown.

She holds the Royal regalia incorporating the Sovereigns scepter-with-cross, representing temporal power, and the Sovereigns orb, symbolizing the Monarch's role as Defender of the Faith and Supreme Governor of the Church of England. On her right hand, Her Majesty wears the Coronation ring and on both wrists are golden armills.

Please see the article at the end of this presentation for more information and images of the Crown Jewels, such as Elizabeth wears in this portrait. Indeed, on her 65th anniversary of her coronation, Queen Elizabeth II is arguably the world's most popular and best-known monarch. She is currently the fourth-longest-serving head of state in the world, and the longest-serving British or English monarch. Her reign of over two-thirds of a century has seen fourteen different Prime Ministers of the United Kingdom. For almost 70 years, she has served the United Kingdom of Great Britain and Northern Ireland as well as the British Commonwealth, which includes Australia, Canada and more than thirty other countries. A seated portrait of Queen Elizabeth II at her coronation in 1953. The legends HER MAJESTY QUEEN ELIZABETH II and LONG MAY SHE REIGN define the theme. Her Majesty, Queen Elizabeth II, in crowned profile facing right. This portrait, featuring Her Majesty wearing a tiara and pearl earrings, was executed by the sculptor Ian Rank Broadley. The legend ELIZABETH II, the date of issue and denomination also appear, while the legend 1 OZ 999 SILVER guarantees the weight and purity. The coin is encapsulated inside an elegant, luxury presentation case, protected by a full-color outer box. A full-color, individually-numbered certificate of authenticity is included.

Image of the back side of the certificate is mint-supplied and for general reference only. Serial number on image is NOT indicative of the serial number you will receive! The item "Niue 2020 Queen Elizabeth II Long May She Reign QEII $1 Oz Pure Silver Proof" is in sale since Saturday, August 29, 2020.