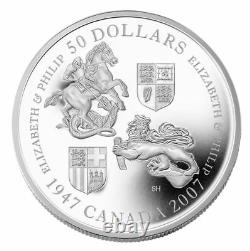 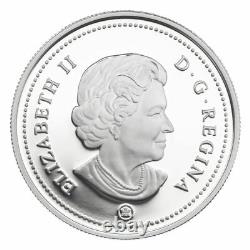 Princess Elizabeth was just 13 years old when she met her future husband, Lieutenant Philip Mountbatten. Seven years later, they announced their engagement and the wedding was set for November 20, 1947. The couple was married at Westminster Abbey in London and the event proved to be an uplifting celebration for a nation eager to recover after years of war. Now, 60 years later, Her Majesty Queen Elizabeth II and His Royal Highness, Prince Philip, Duke of Edinburgh will celebrate their diamond wedding anniversary. This magnificent silver coin designed by Steve Hepburn celebrates that enduring union between Queen Elizabeth and Prince Philip with centuries-old symbols; the shields from their respective Coats of Arms and the mascots that are mounted on the State vehicles they travel in.

This coin is sure to be the crowning glory to any collection. Composition: 99.99 % pure silver. Come in original packaging with CoA. Expedited Parcel w/ Tracking & Signature.

The seller is "citcns" and is located in Halifax, Nova Scotia. This item can be shipped to Canada, United States, Germany, France, Australia, United Kingdom.