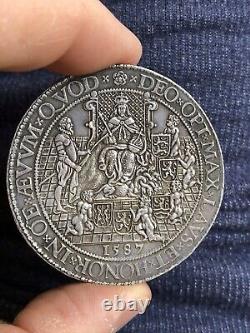 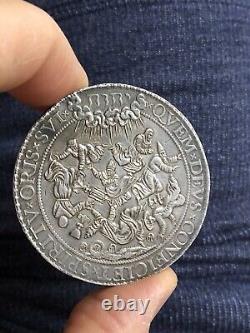 Spanish Netherlands AR 52mm medal 1587: Queen Elizabeths I supports the Dutch. This medal commemorates the Dutch request that Queen Elizabeth provide active help in the revolt against Spain. She ultimately provided a force led by Robert Dudley, one of her closest associates (he was often thought as the possible consort). In the end, the expedition proved a failure (source: Nomos). Grade: EF/EF+ with attractive dark toning, only one very small edge bump - a wonderful example!

Obverse: (rose)xDEOxOPTxMAXx LAVSx ETxHONORxINxO-ExÆVVMxQVODx = To the best and greatest God be praise and honor for ever, because... Elizabeth I of England enthroned facing, crowned, holding orb and scepter, and wearing robes decorated with the Tudor rose; below her feet, hydra; below and to the right, five naked boys, each holding a shield, bearing, from left to right, the arms of Guelderland, Holland, Zealand, Utrecht and Friesland; to left, the Earl of Leicester, standing right, holding the right side of the queens cloak with both hands and treading on the hydras tail with his right foot; in exergue, 1587. Reverse: xQVEMxDEVSxCONFICIETxSPIRITVxORISxSVIx (= Whom the Lord shall consume with the spirit of his mouth) Hebrew name of Jehovah in clouds and rays; below, Pope, cardinals, bishops and nun, chalice and wafers, all falling from heaven. The item "Spanish Netherlands AR 52mm medal 1587 Queen Elizabeths I supports the Dutch" is in sale since Sunday, November 15, 2020.

This item is in the category "Coins\Historical Medals/Medallions\European". The seller is "coinclass" and is located in London. This item can be shipped worldwide.