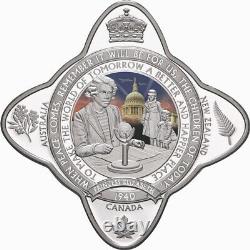 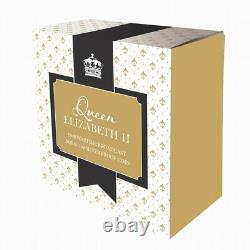 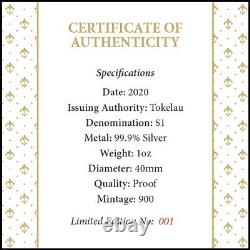 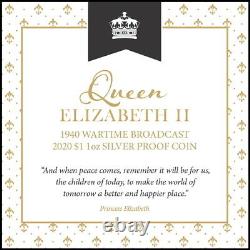 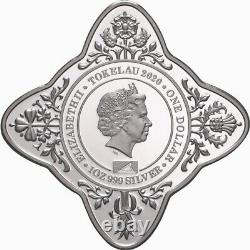 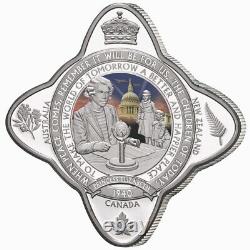 Remember the historic wartime radio broadcast by Queen (then Princess) Elizabeth II at the height of the Battle of Britain in 1940 during World War II. Regal, star-shaped one troy ounce. Pure silver proof with color!

Talisman Coins is honoured to bring you this rare, royal cross shaped pure silver proof with color to celebrate Queen Elizabeth's first public speech. At the height of the Battle of Britain, on 13 October 1940, the fourteen year old then-Princess Elizabeth addressed the children of the United Kingdom and the British Commonwealth by radio, on the BBC's. She specifically addressed children who had been evacuated from the cities, stating in part, We are trying to do all we can to help our gallant sailors, soldiers, and airmen, and we are trying, too, to bear our own share of the danger and sadness of war. We know, every one of us, that in the end all will be well.

The full text of Elizabeth's speech may be found lower in this listing; don't miss her shout-out to the United States! This low mintage, one troy ounce pure silver proof sports full color and has a total mintage of just 900, making it truly rare! Get this outstanding work of art, a fitting tribute to Elizabeth's historic milestone!

Mintage just 900 - get yours now or forever hold your peace! An Outstanding, Historic and Symbolic Design. The center scene features Princess Elizabeth at the radio microphone, making her first public address live on the radio. To the right are a pair of evacuated children.

A full-color backdrop of the iconic dome of St. Pauls Cathedral in London, lit from behind by searchlights reaching the nighttime sky to illuminate German bombers during the Blitz highlights the desperation of this stage of World War II, when Britain stood alone against the Nazi threat. The most famous words from Elizabeth's speech surrounds the centerpiece: When peace comes, remember it will be for us, the children of today, to make the world of tomorrow a better and happier place.

The names and floral emblems of the three principle Commonwealth countries then fighting the Aix can be found in three of the arms of the star: Australia - Golden Wattle Canada - Maple Leaf New Zealand - Silver Fern The Royal Coronet of a child of the Sovereign (reigning monarch, then King George VI) is positioned in the top arm of the star. The reverse design includes the floral emblems of the four countries of the United Kingdomthe rose (England), thistle (Scotland), leek (Wales) and shamrock (Ireland). Queen Elizabeth's First Public SpeechA Wartime Radio Address. Even though barely a teenager, the future Queen Elizabeth II demonstrated her leadership abilities with aplomb during her first public speech in 1940, at the height of the Battle of Britain. Made on the BBC's.

Radio show, Elizabeth's speech was a heartfelt address to the children of the UK and Commonwealth, many of whom were forced to live away from home due to the war with Nazi Germany. A flawless performance, touching the hearts of millions around the globe, the speech was an auspicious beginning to the public life of a woman who would become Britain's longest reigning monarch. The full text of Elizabeth's speech may be found lower in this listing; don't miss her shout-out to the United States! Queen Elizabeth During the Early Part of the War. In September 1939, Britain entered the Second World War.

Lord Hailsham suggested that Princesses Elizabeth and Margaret should be evacuated to Canada to avoid the frequent aerial bombings of London by the Luftwaffe. This was rejected by their mother the Queen, who declared, The children won't go without me. I won't leave without the King. And the King will never leave.

The princesses stayed at Balmoral Castle, Scotland, until Christmas 1939, when they moved to Sandringham House, Norfolk. From February to May 1940, they lived at Royal Lodge, Windsor, until moving to Windsor Castle, where they lived for most of the next five years. At Windsor, the princesses staged pantomimes at Christmas in aid of the Queen's Wool Fund, which bought yarn to knit into military garments. The extraordinary design of this coin is described above.

Her Majesty, Queen Elizabeth II, in crowned profile facing right. This portrait, featuring Her Majesty wearing a tiara and pearl drop earrings, was executed by the sculptor Ian Rank Broadley. Each arm of the star is engraved with one of the four floral emblems of the constituent countries of the United Kingdom: the rose of England; thistle of Scotland; shamrock of Northern Ireland; and leek of Wales. The legend ELIZABETH II, the date of issue and denomination also appear, while the legend 1 OZ 999 SILVER guarantees the weight and purity.

The coin is encapsulated inside a luxurious clamshell-style presentation case, lined with black velvet and satin, and protected by an outer cardboard box. An individually-numbered certificate of authenticity is included. Image of the back side of the certificate is mint-supplied and for general reference only.

Serial number on image is NOT indicative of the serial number you will receive! 40.00 mm x 40 mm. Queen Elizabeth II's 1940 Wartime Radio Address. As Princess Elizabeth, The Queen made her first public speech on 13 October 1940, with a radio address to the children of the British Commonwealth, many of whom were already living away from home due to the Second World War.

Her younger sister, Princess Margaret, joined in at the end. Thousands of you in this country have had to leave your homes and be separated from your fathers and mothers. My sister Margaret Rose and I feel so much for you as we know from experience what it means to be away from those we love most of all.

To you, living in new surroundings, we send a message of true sympathy and at the same time we would like to thank the kind people who have welcomed you to their homes in the country. All of us children who are still at home think continually of our friends and relations who have gone overseaswho have travelled thousands of miles to find a wartime home and a kindly welcome in Canada, Australia, New Zealand, South Africa and the United States of America. My sister and I feel we know quite a lot about these countries. Our father and mother have so often talked to us of their visits to different parts of the world. So it is not difficult for us to picture the sort of life you are all leading, and to think of all the new sights you must be seeing, and the adventures you must be having.

I know you won't forget us; it is just because we are not forgetting you that I want, on behalf of all the children at home, to send you our love and best wishes - to you and to your kind hosts as well. Before I finish I can truthfully say to you all that we children at home are full of cheerfulness and courage. We are trying to do all we can to help our gallant sailors, soldiers and airmen, and we are trying, too, to bear our own share of the danger and sadness of war.

We know, everyone of us, that in the end all will be well; for God will care for us and give us victory and peace. And when peace comes, remember it will be for us, the children of today, to make the world of tomorrow a better and happier place. My sister is by my side and we are both going to say goodnight to you. Goodnight, and good luck to you all.

The item "Tokelau 2020 Royal Star Queen Elizabeth World War II Broadcast WWI $1 Oz Silver" is in sale since Saturday, July 3, 2021. This item is in the category "Coins & Paper Money\Coins\ World\Australia & Oceania\Australia\Commemorative". The seller is "talismancoins" and is located in Saint Louis, Missouri. This item can be shipped worldwide.